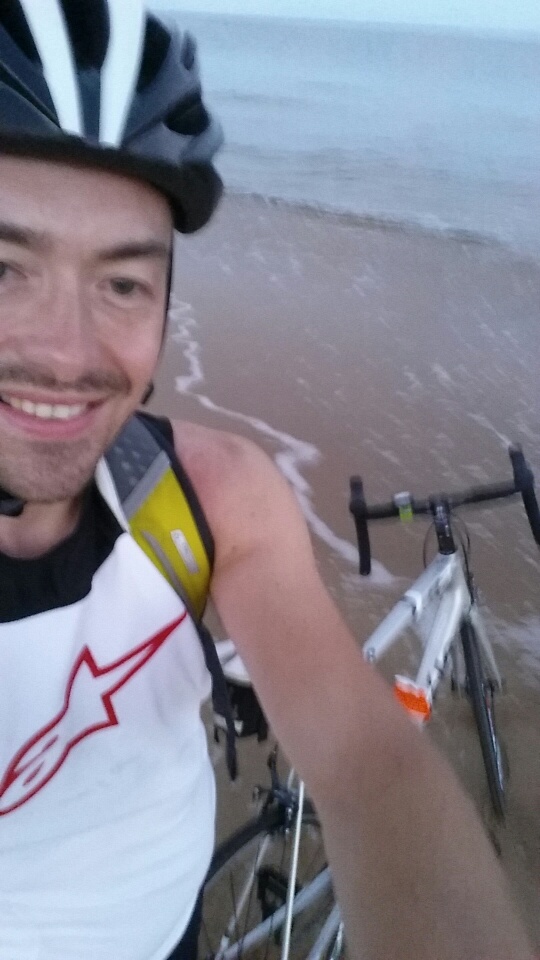 I left Jen to sun herself by the beach for the day and I decided to cycle yesterday to the top. There is an annual race which starts in the northern Maui town of Paia and goes to the summit, called ‘Cycle to the Sun’. It’s 56km of climbing constantly at an average of 5%, the idea being that you start on the beach with a wheel in the sea, and finish at over 10,000ft/3,000m. It’s the only road in the world where you can do that.

The winner of the race usually finishes in just a touch under 3 hours, typically Olympic gold medallists and TdF racers…. I was hoping to do it in under 5.

Unfortunately our hotel is 35km from Paia, but I figured an extra 70km on the flat isn’t a big deal, so I started where we are staying, in Wailea. The staff at the hotel said they had never heard of anyone doing it from here, people would normally get a taxi to Paia…

I started in the dark and got the inevitable crash out of the way early at about 5:45am, when I fell off on a gravelly road behind the hotel before I had even started, and picked up a bloody knee/hip/elbow and shoulder… I’ve had a few bike crashes in the last year, and every single time it has been on a rented (foreign) bike where they connect up the brake levers the other way round to us.

After I composed myself and used the beach showers to wash the gravel and blood off, I rolled a wheel into the sea for real sea level and the selfie photo as evidence.

Then did the 35km around the coast to Paia which is where the race route climb starts.  It was about 30 degrees at 7am in Paia, but during the first 2 hours I rode through tropical rain, clouds and more sun… The road was basically empty, I think over the whole climb I probably saw less than 20 cars. At 2000ft is about the last point where there was a view. 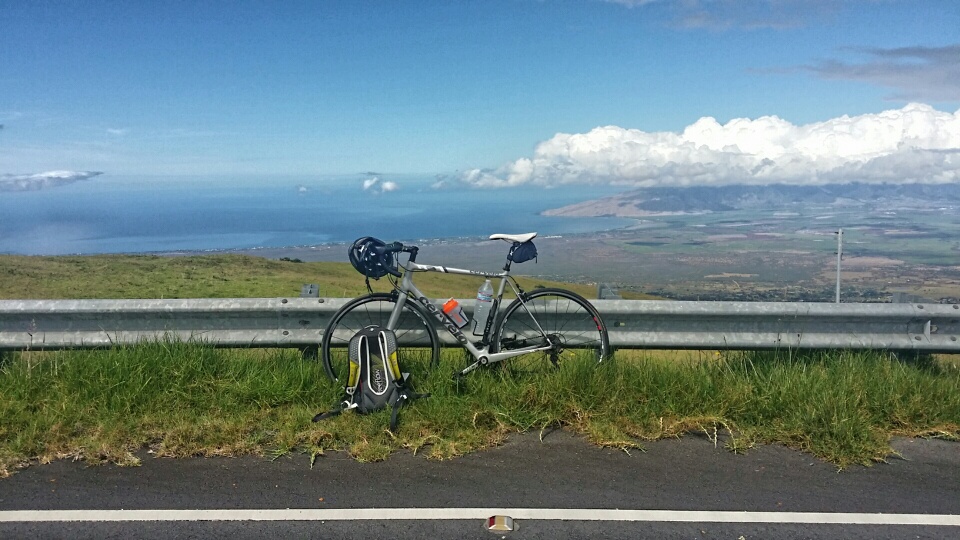 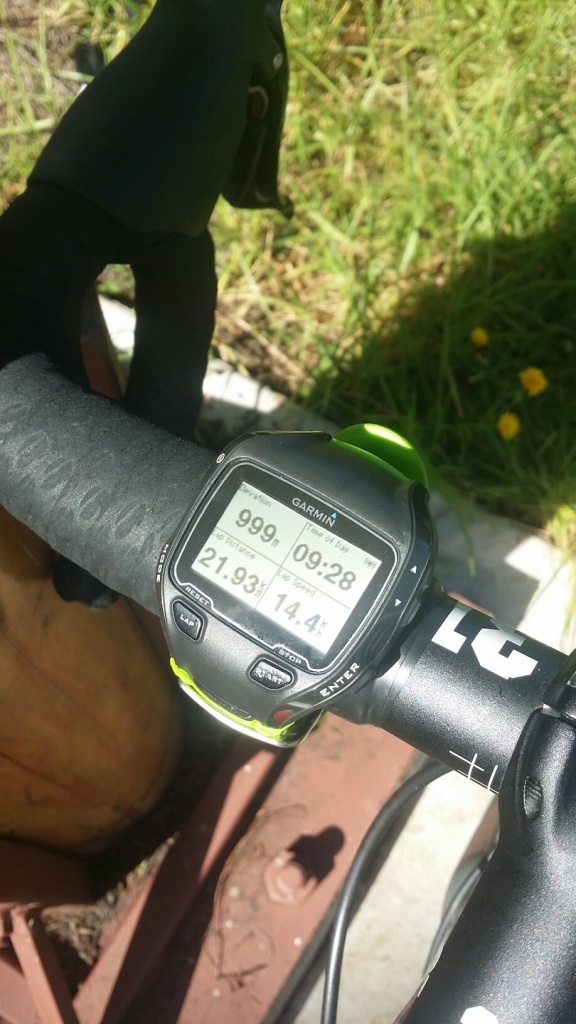 The climb is relentless at between 4-7%, and I found it was mostly tough mentally. It just goes on and on and on, and my legs were on fire from the pedalling, I wished my bike had some lower gears… Or an engine. It gradually got cooler and cooler with the elevation.  In the cloud there was no view, and the immediate landscape is lava rock and pretty featureless, so I was just cranking away and watching the Garmin elevation counter go up 1 metre at a time. It’s a bit depressing when you know you have done only 999m out of 3,000 and it takes so much work to do each one. I was averaging 11kph, it was frustrating to think that I normally run faster than this.

Thankfully I had my iPod with an audiobook to occupy my mind, or I might have gone mad. 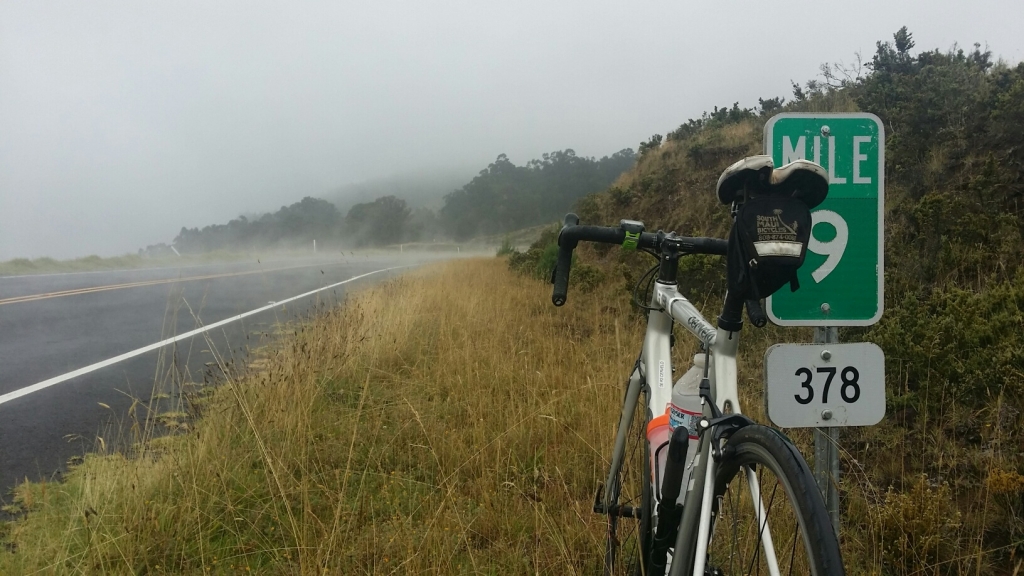 The roads had obviously been in the sun before it started to rain here, because they were steaming – I’ve never seen it so thick, and I could feel the warm steam on my legs. It looked magical.

After a couple of stops for snacks and water I got to the national park entrance to pay my 5 dollars. It had got quite cold here (this is at about 7,000ft and it was 6 degrees C). The park rangers warned me that I should put some layers on when I get to the top because it’s around freezing point up there even in the sunshine, and that some cyclists get hypothermia from windchill on the ride back down. 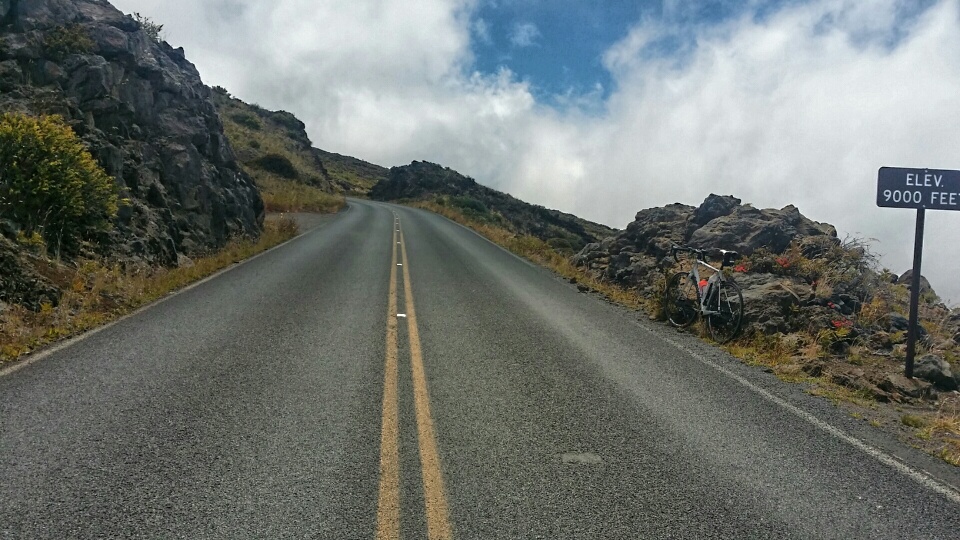 The last 3,000ft felt like it took forever. I stopped for a few minutes rest and a snack at 8,000 and 9,000. I didn’t feel much like carrying on, but there’s not much point in riding all this way and not getting all the way to the top.

At 9,800m there’s the visitors centre where we took all those sunrise photograps but to ride to the real top you have to carry on past it, it’s only about a mile from here but the gradient steepens quite a bit to between 10-20% and I thought I was going to crack! My legs were like jelly but I could see the top at this point, and that gave me the motivation to keep pushing forwards and upwards. 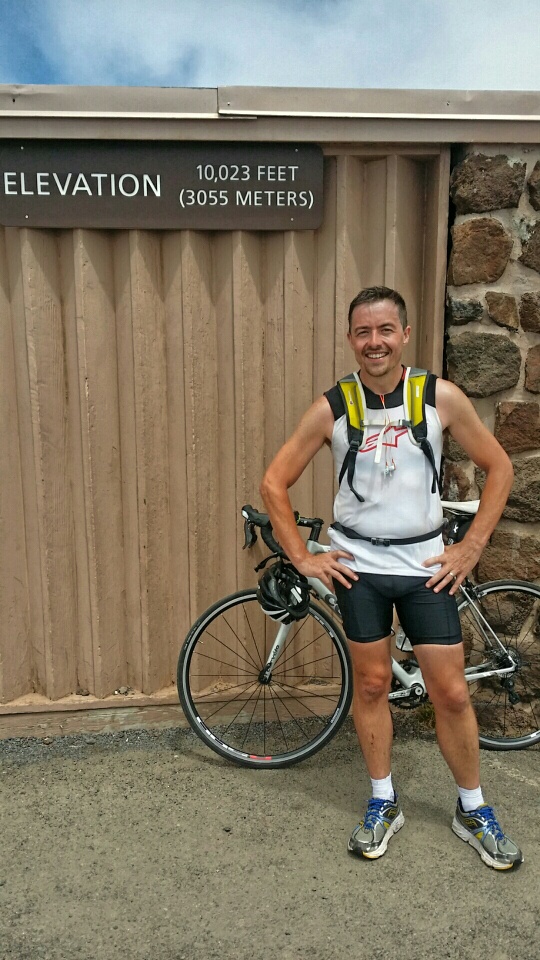 I made the top in 4:57:03, including about 20 mins of stops to get stuff out of my rucksack. On a normal ride I would be carrying this stuff on my bike, so wouldn’t need to stop, but on this ride I had been glad to rest for a few mins.

At the top I rode up to the elevation sign and a few couples/groups of people wanted to talk to me. they had all driven up in their cars to the car park about 100m away, some were panting from just walking up the steps.

When they asked what it was like to do the ride I was still a bit breathless so I just said ‘it was quite hard’. I was a bit dizzy and not really sure what else to say. They had lots more questions like how long, how far, where did I start etc.

Some also seemed to want their picture taken with me, probably because they thought I was some kind of lunatic.

I didn’t hang around long at the top, it was freezing cold. I stuck my jacket on and rode down. I didn’t have to touch the pedals for over 35km, which is a very unusual experience. The descent to 3000ft took only just over half an hour. It was pretty testing because riding back through the clouds had no visibility and the roads were slippery from the rain, and something like 30 hairpin corners. I averaged 50kph and saw no cars on the way down, they were probably going the same pace as me.

Eventually I got down to a sensible altitude and rode between all of the sugar cane fields for 25km or so along some really smooth new roads, and then out to the coast for a blast along the flat road back to the hotel. Thankfully with a slight wind behind me, I managed the final 35km in less than an hour.

Within 10km of the hotel I spotted a Shaved Ice stand which had a big queue, figured it must be popular and ate a very tasty ice cream by the beach. It was just the job.

If you follow this link you can see all the data about the ride. The Elevation graph is particularly ‘volcano-like’ from sea-level to over 3,000m!

The morning after I was pretty achy, sore legs/back/chest/neck and the various crash injuries, but had a nice little ride back to the hire shop. Now back to rest up by the beach with a good book before the long set of flights back to the UK.