One of my favourite characteristics of triathlons in the US is that we all say a prayer before the race. I don’t consider myself religious in any way, maybe just stoic, but in the UK typically there would be a lot of eye-rolling and generally being standoffish about spending a moment being grateful to be able to enjoy racing and willing everyone to have a fast and safe race.  Just generally, I find folks in the US aren’t encumbered by negativity in the way Brits are.  After a bit of thanks, everyone sings the Star Spangled Banner whilst holding their hand on heart. I don’t know most of the words to the anthem so just listen in and join the bits I know, but it’s pretty moving to see nearly 400 people standing in the dawn singing it. They really love it. 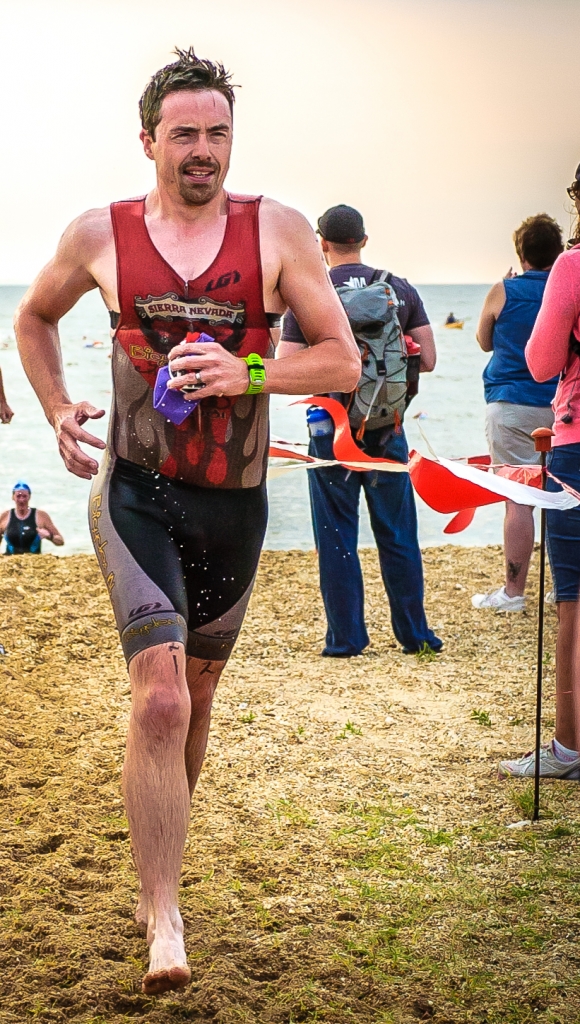 I was in the third wave of swimmers. The announcer said in his race briefing that we should sight for a water tower on a nearby hilltop, not the buoys. The tower was over 45 degree different direction than the buoys, and he had to assure the competitors that he wasn’t joking around.
The first wave of swimmers went off and you could see them all being dragged by the current. Looks like fun.
I swam off well and managed to avoid too many other people, and was feeling pretty good – but really struggling to breathe, whenever I would go for a breath, I’d just get a face full of wave.
The currents were pretty strong and tiring to swim in, and sometimes I seemed to be hardly moving. I got quite dizzy from the waves and felt sick from taking on some seawater and sand. I found it quite hard to concentrate on tidy technique because I was a bit busy trying to reach air and breathe.

When I came out of the water I had swum over 1800m (over 200m more than the route) and with a terrible pace, nearly 2:30/100m.
Swim leg placing: A shockingly bad 334th (bottom 12%).
The best swimmers finished the swim in 20-22 mins. I have no idea how with those waves and currents, but I imagine they swam a much neater line for a start.

Worryingly not many bikes in transition…
Pretty easy though thanks to no wetsuit. Still a bit dizzy and feeling sick but managed to pull socks and shoes on without falling over.  T1 Placing: 204th 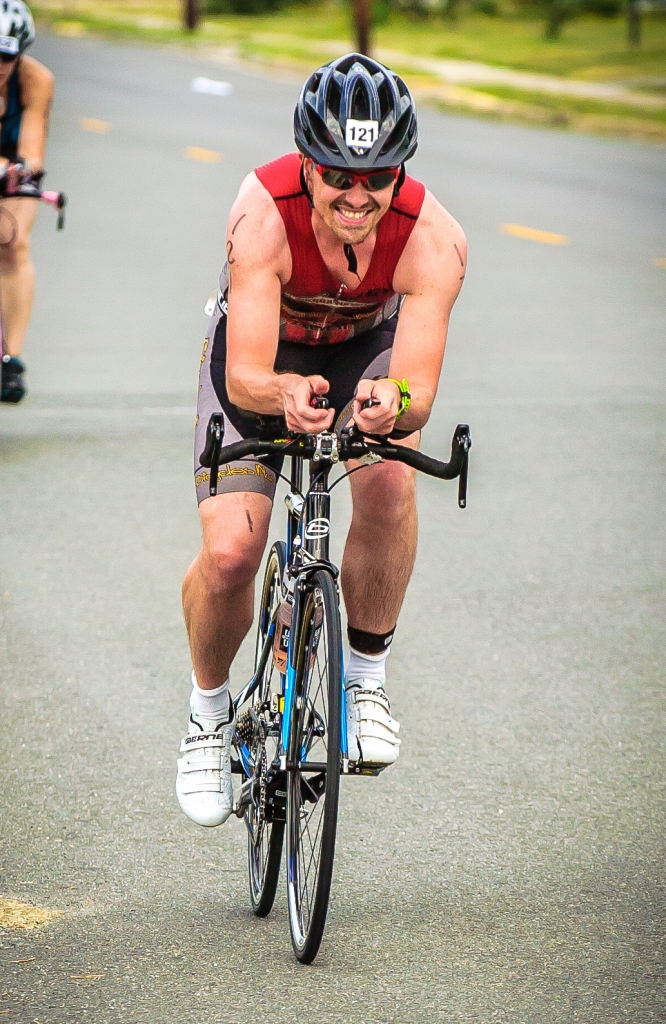 The bike was pretty good. I’m not familiar with the ‘Blue Bikes’ brand, but it was a good piece of kit and the geometry of it felt very familiar to my Trek since it was set up more aggressively in my bike fitting, so I felt right at home. I like the SRAM shifters but I really missed the DI2 – I hadn’t really noticed how much the Di2 constantly makes little adjustments to the front mech to keep it central to the chain, depending on where you are on the cassette. Smart feature.
The bike route was exactly the same road I had just driven in on, so I had had a chance to scope it out. I knew my swim had been really bad so went hard on the bike, figuring that I could manage a 10Km run even if I was knackered from the bike, so as usual I kept my cadence high and just pushed on. I feel like I overtook at least 100 people, and got passed by no-one (although not a huge surprised because I started so near the back)
The route wasn’t really hilly, just undulating and on really fast smooth tarmac, so I spent the entire ride in the aero bars and loved overtaking so many riders. Managed to nudge the average speed up to 35kph a few times and finished with it at 34.9kph.
Placing: 51st place for the bike leg: Top 14% across all age groups.

I was fast and no mucking about or mistakes. 37th place.

The sun was blazing but there was quite a strong wind off the coast which was tough to run in, but refreshing. At the beginning of the run I tried to pace at about 5:00/km but just got carried away and was soon at 4:30-4:45, then settled into a rhythm which felt good, sometimes the wind was with me and sometimes against me.
Again I overtook quite a lot of people on the run – would guess at least 50, and only got overtaken by one.
On the run back for one section we were running with the wind, and suddenly realised how hot it was. Thankfully one of the rest stops was giving out ice cold flannels, a really welcome relief on my forehead.
Finished at a relatively gentle average of 4:44/km.
Placing: 88th place for the run leg – inside the top quarter.

If I had managed to put in a swim equivalent to my normal pace for 1 mile (30 mins), I would have been about 75th on the swim and ultimately finished the race 50 PLACES HIGHER! I also feel I made the swim hard work for myself, and probably still burn too much energy through bad technique. I have a session with an instructor coming up soon, so hope that will be valuable.

After the race I drove back to the bike hire place in Washington DC and went for a gentle ride around town to loosen up my legs and see some of the monuments you see in all the movies. The temperature and humidity were pretty high. Good practice for Mallorca I guess.
I was pleased my knee didn’t hurt during the run since it’s been painful in recent training runs, but it has been a bit sore this evening walking around so I’ll be gentle on it this week.