It wasn’t nearly as cold as I expected. Apparently 12.5C today but felt significantly warmer than recent open water swims at Tallington allegedly at 12C. Phil had lent me his neoprene hat. I couldn’t wear it in the end because it’s massive, he must have a huge head!  I just went doubled up on silicone hats instead, and the water turned out to be just warm enough.

I started the swim away at the back and passed quite a few swimmers. I got kicked and knocked a few times, but nothing too hard. It was pretty clear in Lake Derwent and quite shallow – certainly the last 150m was more like dragging yourself through lake weeds by hand, than swimming.

My T1 was pretty poor, I was clumsy and slow. I faffed about with my socks for ages and couldn’t find my helmet – it turned out to have been knocked off my bars and had rolled a few metres across the transition area.

There was a long run from transition to the bike mount point, and total T1 for me was 6 mins.

When I left T1, someone shouted that I was in 24th place. I was amazed. 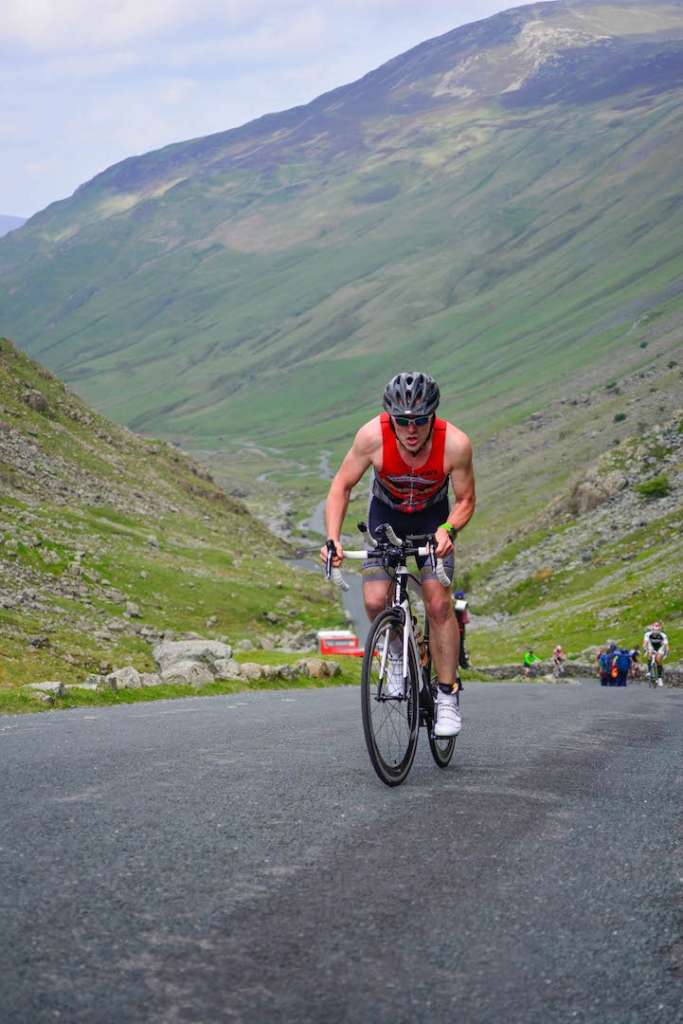 It started relatively flat but went up a huge long climb up to the top of Buttermere with a headwind at over 20mph. Near the summit the climb is 20% which was a killer.  By the time I had got to the top, I had passed quite a few riders.

There’s a speedy (but treacherous) downhill next, the surface was pretty rough on the way down but I passed another 3.

Then a second tough ascent, still with a killer headwind up to the summit of Honister Pass. It took all I had not to get off and walk.  I had managed to overtake another few people and defend against one bloke who had hung on to the back of me for a bit and tried to come past at the top.

On the bike I was drinking the orange Powerbar drink and had one of the little apple flavour Powerbar concentrated fruit juice things, they are the same flavour provided at the Ironman in September, so figured it’s good to practice with them.

At this point there was an excellent, fast descent. It looks like I clocked up to 43mph a couple of times, it was pretty steep but really nice in the sunshine.. Mainly overtaking cars. According to the Strava segment (called Seatoller Banzai) I’m in the top 10, at the time of writing 5th place out of 1950 people.

From here there’s a blast with a tailwind back into town along the B5289 past Derwent. I was storming along and passed another few riders.  By this point I figured I might have made it into the top 15.

Running back across a long grass path to T2, the run was feeling tough in the hot sun, but legs felt pretty strong. It seemed a long run in cycle shoes. I didn’t feel sick so happy that I hadn’t drunk too much fluid on the ride.

My T2 was ok, pretty well organised, no mistakes.

Running out of T2 I was feeling strong and tried to keep the pace at about 4:45/km, and then slowed my pace a little as the climbing started.  One bloke came past me as we ran out of town, and then the run turned into a ridiculous scramble up forestry banking, for 1.5km.

My watch kept auto-pausing because the pace was so slow and/or lots of tree cover. I caught the one guy who had passed me. The next 15 mins was just like climbing a grass ladder.  Eventually I got to the summit where they give you a wristband to prove you made it. The views back over Keswick and the lake were amazing.

Then a blast down the gravel track back to the bottom. I was loving this, and sustaining just under 4:00/km. In places the terrain was a bit sketchy with loose gravel and rocky gullies, and I had a couple of near falls, but managed to stay perpendicular.

Then nearly at the bottom, yellow signs pointed us back up another forestry bank. It was steeper than before, nearly crawling on my hands, but was well signposted. I had caught a couple of guys here, and we crawled up together. Then we realised we were going to end up back at Latrigg summit again.  When we got to the top, there were another 3 runners there with the marshall talking about the fact that we’d all gone the wrong way. The marshall didn’t know what to do so just gave us all another green wristband……

So we ran back down the first sketchy forestry bank, it was tough, slipping and tripping and at the bottom I felt lucky not to have fallen, a couple of runners fell head over heels because it was so steep.  Eventually I ran back through town and to the finish, mainly feeling pretty frustrated that I’d wasted at least 15 minutes on the run by going wrong.

Looking at the results, I finished the bike in 13th place overall, and 7th in my category. Very pleased with that.

I could have finished the whole event in the top 15 if I hadn’t gone wrong way on the run.

So 131 finishers and I ended up in 46th place overall, having given away over 15 mins and over 30 places with that run error. The only small comfort is that I wasn’t the only one…

Results are up, but looks like a few issues with people’s Swim & T1 times being added together, mine included: http://times.mytriclub.co.uk/view-race/kmflong2014/

The event had a slightly low-quality feel (no event tee, crappy signage, swim hats from a different event, only one water stop and very few marshals) but was in a beautiful location and although the forestry banks were not a run but a climb, I really enjoyed the hills both on the bike and run.